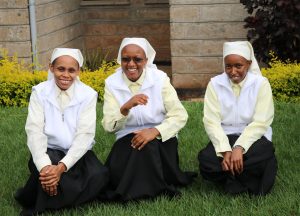 The formation of consecrated persons is not something that is simple nor automatic… it is not a goal to achieve, but a process to undertake:  It requires attention to different aspects affecting the formation process and an active intervention by the various actors (both human and non-human) who are involved in it.  Formation then is a work that involves God and human beings – that is, the One who proposes it and the one who receives the proposal. It is accomplished not only during a particular time dedicated for it but, more importantly, within the entire lifetime of the consecrated person who accepts God’s proposal.

It involves the continual attitude of listening and of sharing appeals, problematics, and vision. Each individual is called to allow himself/herself to be touched, educated, provoked, and enlightened by life and history, by what he proclaims and celebrates, by the poor and the marginalized, by those who are near and those who are far.”

Thus, any person admitted to the novitiate must already show a capacity for an adult commitment that would make her disposed to a life of permanent formation.

There are important presuppositions regarding the FORMEE in the “new paradigm” of the Consecrated Life: She is the interlocutor of God. She is the one whom God has raised to be His dialogue partner, the one capable to listening to His voice and of responding to it; in this dialogue with God, she discovers her truth and the possibility of fulfilling it. She is capable of going beyond herself. God meanwhile takes her freedom seriously and does not impose Himself on her. God leaves her free to accept or refuse his proposal.

Thus, the primary formator is the Trinitarian-God alone: it is the Father that molds in the formee the sentiments of the Son through the action of the Holy Spirit.  But in this divine involvement in the formation of the formee, God uses human mediation. God’s use of human mediation is habitual in the action of salvation – God loves to reach out to a human being through another human being, someone who is always weak and limited, inferior to the aim that is predetermined and a “useless servant” (as Jesus says).

In this logic, the FORMATOR allows herself to be formed by God in every instant of her life – she knows then that she is also undergoing formation. The Formator has the responsibility for bringing about three pedagogical dynamics in the Formees: educating, forming and accompanying.

Vocation to religious life especially to contemplative life is a pure gift from the Good God who always bring about the best in us and for us. The only thing we can do about it is to receive it joyfully and generously. God knows how and where best our gifts and talents can be full realized. Thus, in Mark 10:21 we read “Jesus looked at him and loved him. ……… Then come, follow me.” The truth is Jesus has looked at us and loved us, though He knows we have many things to sell, He, nevertheless, calls us. Amazing Love. So, we don’t have to be overwhelmed by what we lack but fix our gaze on Him who knows us.

The main question is not what I want to do with my life, though necessary, but what does God want of me? Our call is first and foremost to be with the lord like Mary. Lk.10:39 “She had a sister called Mary, who sat at the Lord’s feet listening to what he said.” It is an invitation to come and “waist your life and time” with the Lord. John 1:39-41 Jesus said, `Come and see.’ They went and saw the place where Jesus was staying. The time was about four o’clock in the afternoon. They stayed with Jesus the rest of the day. The rest of the day can mean the rest of your life.

In our monastery the initial formation is divided into four stages. Namely:

Aspirancy – ‘come and see’ Jh.1:38-39. This is a time of transition from the world and family life to the community. The candidate is gradually introduced into the monastery life. She is helped to discern her vocation through regular dialogue with the mistress. The candidate is expected to grow in the knowledge of and experience with the order. It goes for one year.

Solemn vow is a vow (“a deliberate and free promise made to God about a possible and better good”) that the Church has recognized as such. Or solemn vow is the permanent and definitive embracing of the religious state in an institute recognized by the Church as a religious order. In other words, Solemn Profession is a public declaration of one’s commitment and intention to give herself completely to God and to the service of others though the specific charism of her order. The perpetual vows of poverty, chastity and obedience constitute a radical commitment for life which predetermines all other choices. The sister shares fully in the life of the community after solemn profession. In a Dominican term one becomes a chapter member.

Formation as a religious continues beyond solemn profession, in order to help the professed, continue growing in her relationship with God, knowledge of the faith and of the spirituality of the order. 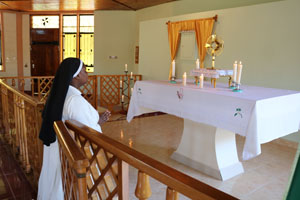 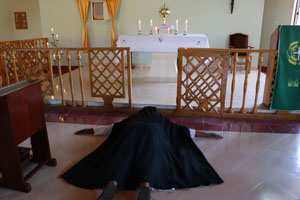