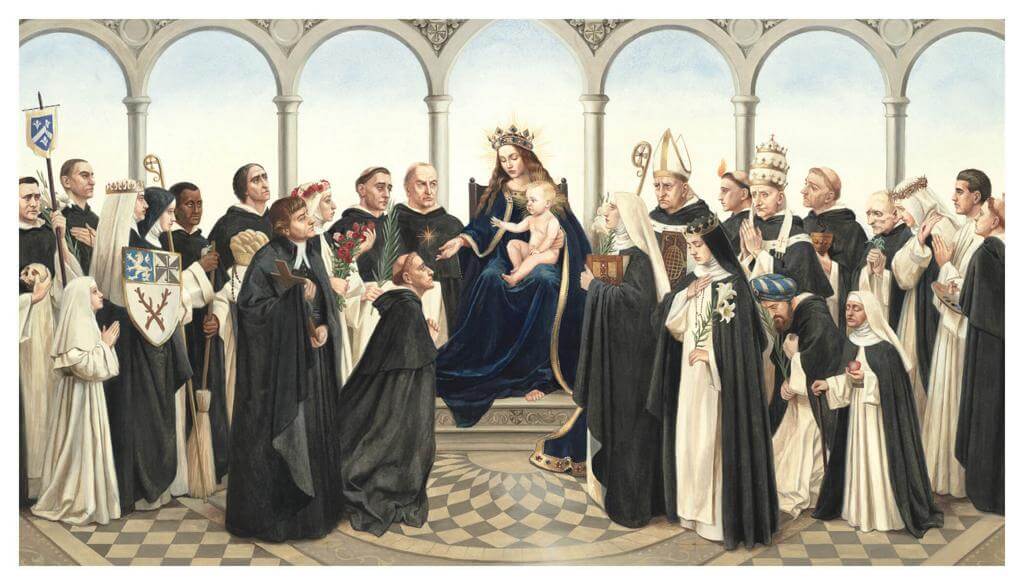 The Dominican Order is a Roman Catholic religious order founded by St. Dominic, at Prouille in 1206. From this developed the conception of an institute of preachers to convert the Albigensians, which received provisional approval from Pope Innocent III in 1215. Dominic gave his followers a rule of life based on that of St. Augustine and made his first settlement at Toulouse; on December 22, 1216, Pope Honorius III gave formal sanction. The novelty of the institute was the commission to preach Christian doctrine, a task previously regarded as the prerogative and monopoly of bishops and their delegates. As early as 1218, Dominic sent seven of his followers to the university of Paris to study Theology.

From the beginning the order has been a synthesis of the contemplative life and the active ministry. The members live a community life, and a careful balance is maintained between democratically constituted chapters, or legislative assemblies, and elected superiors. In contrast to the monastic orders that predated it, the Dominican order was an army of priests, organized in provinces under a master general and ready to go wherever they
were needed.

The order has continued to grow and it consists of friars, nuns, apostolic sisters, laity and youths. The Order is best known for its commitment to holistic education and the pursuit of truth (Veritas). Dominicans are preachers, meaning they spread the Gospel through
words and actions. 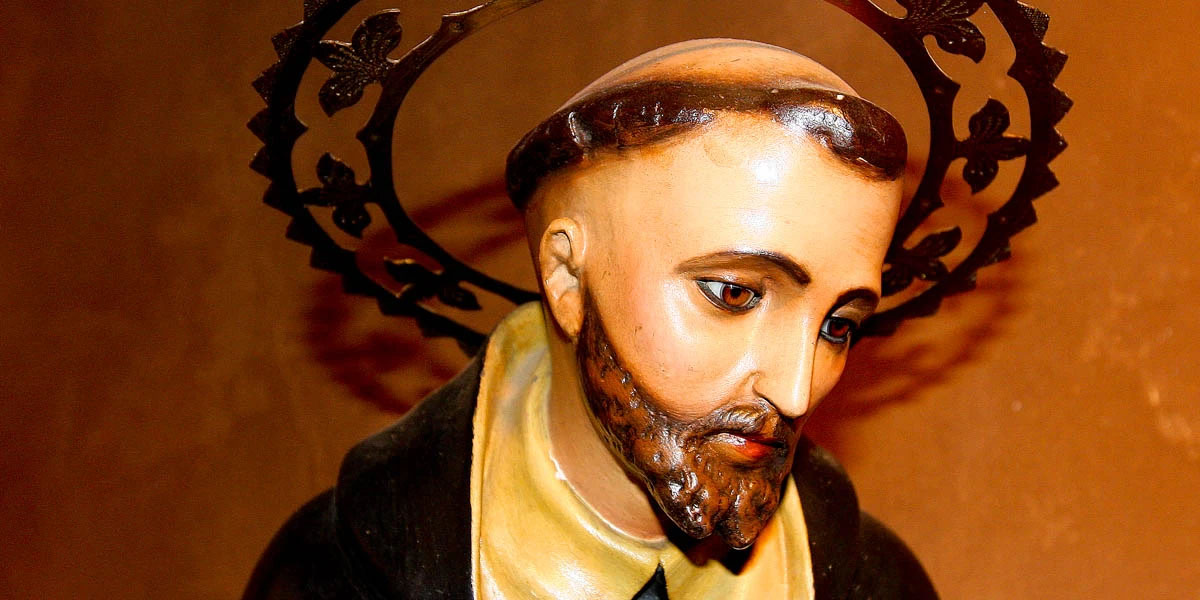 St. Dominic was a man characterized by exceptional integrity and extraordinary energy of divine zeal which carried him all along. He was also a man of remarkable character and broadness of vision. He had the deepest compassion for every sort of human suffering, and he saw the need to use all the resources of human learning in the service of Christ

Br. Jordan, the second master of the order, exclaimed with admiration, “who could ever hope to imitate the virtues of this man? To be able to do what he did requires more than human strength, it presupposes particular grace, which he alone had.” Nevertheless, he continued,” brethren let us follow our father to the best of our ability.”

Dominic was born in the year 1170 in a simple village in Northern Spain called Caleruega. He was born in a noble and eminently Christian family. The father was Felix Guzman and his mother was Jane of Aza, a daughter of the old Castilian nobility. The Guzman home was a household of Saints, for the Church has accorded the honor of the altar both Jane and the oldest son Mannes. He had another brother: Anthony who gave his life when caring for the plague –stricken. There must have been at least one other child, probably a girl, since history records a nephew and two nieces of St. Dominic who were members of the Order he founded

The future greatness of Dominic was announced to Jane before his birth by a mysterious vision of a hound who fled through the world igniting everything from a torch he carried in his mouth. Troubled by the vision Jane went often to pray at the shrine of St. Dominic Silos in the nearby hills.  In gratitude for the consolations that she received there; she named his third son after St. Dominic of Silos. During baptism another sign foretold the greatness of his destiny. As the water was poured on his forehead, his grandmother saw a bright star shinning on the infant’s forehead. Even as a child, Dominic avoided games and denied himself the comfort of a bed to sleep on the floor.

As a boy of seven, Dominic was sent to, Gumiel d’Izan where his mother’s brother was a parish priest, to receive instruction. He stayed there for seven years.  As a young man, at the age of 14, he went to the university in Palencia, in the kingdom of Leon. Around that time, there was a terrible famine. To give alms to the poor, he sold his possessions, even his precious annotated books, thinking that the living skins of the famished were more important than the dead skins of his books. His study of the arts lasted six years. The sacred repose of the tabernacle was his resting place; all his time was divided equally between prayer and study. He was so heart-warming that no one ever talked to him without feeling better of it. The books which were studied then were; the conferences of Cassian, the Gospel of Matthew and the Epistles of St. Paul, which latter were stamped on his Order.

These peaceful years of growth and development came to an end with Dominic’s ordination to priesthood, a secular priest, probably in 1195. He spent nine years at Osma; where regular life consisted in: the choral Office, the care of the souls in the city parish work, discipline of life under the rule of St. Augustine. During his nightly vigils, Father Dominic grew in holiness as he wept for sinners. God gave him the grace to weep for sinners and the afflicted whom he bore in an inner sanctuary of holy compassion which pressed on his heart, flowed out and escaped in tears. Thus, he began to appear among his brethren like a bright burning torchCall within a Vocation 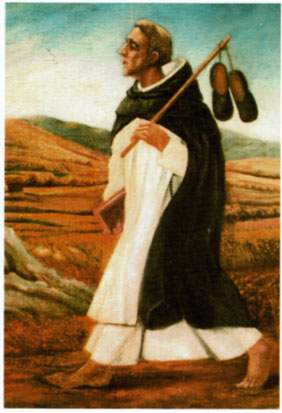 When Dominic was 31 years old, in the year 1201, and the subprior of his community, his prior, Diego d’Azevedo, succeeded the Bishop of Osma.  Two years later Don Diego was sent by the king of Castile to arrange a marriage for his son with the princess of “the Marches” probably Denmark. In making up his retinue, Bishop thought first of the Zealous young priest who have brightened the cloister of Osma, and requested him to go with him, probably in the capacity of secretary.

As they passed through the South of France the frightful character and extent of the Albigensian heresy which then infected the whole of the Southern provinces first came to their notice. People were adopting Albigensianism which considered all material things to be evil. While at Toulouse, though their time was, Dominic was unwilling to go away without doing something for the soul of the innkeeper. So, he opted to stay up all night until he had persuaded the innkeeper to accept the true faith. Dominic, moved by this conquest and by the sad knowledge that there were thousands of others who shared the inn-keepers ignorance, began to dream of some religious body consecrated to the defense of the church and the exposition of truth

Though, Albigensian were extremely austere, Dominic surpassed them all by his charitable sacrifices. He might eat a bit of dried fish or a little bread and soup. Dominic wore an abrasive hair shirt, and had an iron chain forged around his waist. He slept very little, and when he did, it was always on the floor, preferably in the chapel. There, the fire of the Holy Spirit even dried his rain-soaked habit better than those of his companions who spent the night by the fireplace. Exhausted from his vigils, he sometimes napped on the side of the road. It was his practice to carry his shoes until he got to town.

On the night of July 22, 1206, the feast of Saint Mary Magdalen, on a hill of Fanjeaux overlooking the little town of Prouille on the plain, Saint Dominic, while kneeling in prayer, saw what appeared to be a globe of fire descending from the sky and come to rest over a little chapel: shrine of Our Lady. This sigh (or sign of God, “Seignadou” in the local dialect) occurred again the next two nights. From this, he understood that he was to begin his work at the church of St. Mary of Prouille. He started by establishing, what became, the first monastery of nuns at Prouille, which consisted of nine young women who were converted by his preaching. Consequently, the first “Dominican” convent opened on the 27th of December, the feast of St. Mary Magdalen. Saint Mary Magdalen

Dominic was a real missionary. He traveled through France to his Spanish homeland, and then as far as Paris. Neither language nor locked doors could obstruct him. After establishing houses along the way, Dominic returned to Italy, stopping at Milan, Bologna, Florence and Viterbo.

The End of His Earthly Pilgrimage and the Entry into Glory.

Dominic was a man of great prudence in administration.  He called for the first General Chapter of the Order in Bologna around Pentecost, 1220. Although, his health was declining, he continued to walk from town to town preaching. By mid-summer1221, he had spent his strength and his work was bearing fruits. The Order had grown to eight provinces: Spain, Provence, France, Lombardy, Rome, Germany, Hungary, and England.

On August 1221 he lay on the floor of a borrowed cell, in a borrowed habit, for he had none of his own. He had bequeathed to his children this testimony: “Have charity one for another; guard humility; make your treasure out of voluntary poverty. When asked about burial, he expressed his wish to be “under the feet of the brethren,” that is, under the feet of those who bring Good News. He assured them, “Do not weep, my children; I shall be more useful to you where I am now going, than I have ever been in this life.” After his confession, he directed his sons to begin the Commendation of the Dying. During its recitation, he stretched his arms upward and died. It was Friday, August 6, 1221, about 6 o’clock in the evening: fittingly the Transfiguration. Saint Dominic was 51 years old when he died and was canonized in 3rd July 1234.

Since then, on eighth of August each year all Dominicans celebrate the solemnity of our holy Father, St. Dominic.

May the souls of the faithful departed rest in peace