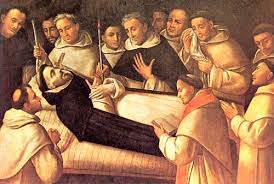 St. Dominic was a man characterized by exceptional integrity and extraordinary energy of divine zeal which carried him all along. He was also a man of remarkable character and broadness of vision. He had the deepest compassion for every sort of human suffering, and he saw the need to use all the resources of human learning in the service of Christ.

Br. Jordan, the second master of the order, exclaimed with admiration, “who could ever hope to imitate the virtues of this man? To be able to do what he did requires more than human strength, it presupposes particular grace, which he alone had.” Nevertheless, he continued,” brethren let us follow our father to the best of our ability.”

Dominic was born in the year 1170 in a simple village in Northern Spain called Caleruega. He was born in a noble and eminently Christian family. The father of the Saint was Felix Guzman, commandant of a fortified castle on the border of Christian Spain in the troubled years of the conquest. His mother was Jane of Aza, a daughter of the old Castilian nobility. The future greatness of Dominic was announced to Jane before his birth by a mysterious vision of a hound who fled through the world igniting everything from a torch he carried in his mouth.

Near the end, he told the elders, “Till this day, God, in His mercy, has kept my virginity pure and unstained. If you desire this blessed gift of God, hold yourselves apart from everything that can conjure up evil, for it is by watchful care in this that a man is loved by God and revered by man. Be eager in your service of God; strengthen and widen this newborn Order; increase your love of God and your keen observance of the Rule; grow in holiness.” Only a few more words were exchanged. After his confession, he directed his sons to begin the Commendation of the Dying. During its recitation, he stretched his arms upward and died. It was Friday, August 6, 1221, about 6 o’clock in the evening: fittingly the Transfiguration. Saint Dominic was 51 years old when he died and was canonized in July 1234.